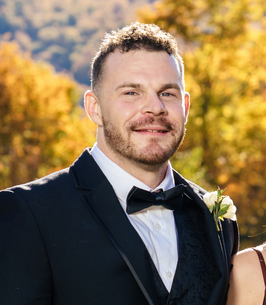 Ben was a kind and gentle soul with a joyful smile and sincere heart. He was surrounded by sisters his whole life and had lots of family love. He was quick-witted and had a fun sense of humor. He and his father had a special sign they would give each other in passing. And when one or other would enter a room, his dad would always laugh when Ben was in his presence. And Ben would just laugh and say “ok dad.” He always had a big hug and “love you mama bear” for his mother. He and Ashley would always greet and leave each other with a hug no matter what, Ashley telling Ben you never leave without a “huggy” for your sister. Ben would always say “I love you little, big sister” and Ashley would say, “I love you big, little brother”. Miranda and Lynneah would always get his attention with a, “hey brother” and he would respond with a “yes sister?” He bonded with Miranda over their tattoos and late night phone calls of their next pieces. When Miranda was little she called him her hero and as the two of them grew older Ben told her that she had become his.

He was a huge Yankees fan and an impressive baseball player. He pitched for his high school team and continued to play every year since for the Champlain Mariners of the Green Mountain Mens Baseball League.

His puppy “son” Bo was his forever loyal sidekick, always with him wherever Ben went. A true companionship with so much love.

Services will be held at St. Luke’s cemetery in Fairfax Vermont on Friday, October 28 at 2:00 PM. All friends and family are welcome to pay their respects. In lieu of flowers, please consider a donation for a memorial of Ben, send to c/o Ashley Soutiere 19 Crystal Rd, Fairfax, VT 05454