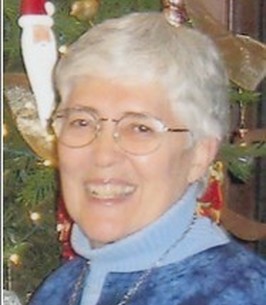 Sister Beverly Marie Lacayo died peacefully on May 19, 2022, at the age of 90. She was a member of the Missionary Sisters of Our Lady of Africa residing at Our Lady of Providence Residential Care Facility in Winooski, Vermont.

Beverly was born in Syracuse, New York on April 20, 1932. Her father, José Heberto Lacayo, and her mother, María Luz Pérez Alonso Lacayo were both born in Nicaragua. Beverly was happy to have visited there during her life and she always felt close to the people of that country.

Prior to joining the Missionary Sisters, Beverly received her BA from Florida State University. She then worked for several years as a commercial artist, book illustrator, interior decorator, fashion illustrator, and did magazine layout.

She joined the Missionary Sisters of Our Lady of Africa in 1958 and after her religious profession she continued her studies at Catholic University in Washington DC, receiving in 1963 an MA in Education. Beverly’s missionary years were served primarily in Malawi and Zambia, in Central Africa.

Gifted with many talents, Beverly served at various times as teacher, youth minister, author, editor, artist, and administrator. She was both author and editor of magazines and newsletters for the Missionary Sisters in Rome, and for the Mission in Zambia. She taught art at a college in Zambia and for seven years she worked in the Youth Ministry in Ndola Diocese. From 1989 to 1991 she served as one of the congregation’s administration team members in the United States. She was also involved with the Africa Faith and Justice Network.

At various times throughout her missionary life Sister Beverly took time for religious and professional renewal courses and she had the privilege of being the primary caregiver for her mother for two years until her mother’s death in 1992.

Then for her retirement years, in December 2004 Sister Beverly joined the MSOLA Community at Providence Place in Holyoke MA and in 2017 she moved to Our Lady of Providence, Winooski to join her MSOLA community here. In both places, she kept an interest in all that was going on around her, and all that was happening in Africa. She kept in touch with friends and her ex-students and as far as she was able, she got involved in various Justice-Peace activities. She loved teaching English to newcomers to the USA.

In 2021 Beverly was diagnosed with a terminal illness which she bore bravely right to the end.

The Missionary Sisters wish to thank the staff at Our Lady of Providence and those of Bayada who have so graciously cared for her during the last year and months of her illness.

Funeral arrangements are being handled by LaVigne Funeral Home. A Memorial Mass will be celebrated in the Chapel at Our Lady of Providence at a date and time to be determined.

In lieu of flowers, donations in Sister Beverly’s memory may be made to the Missionary Sisters of Our Lady of Africa, in support of their ministries in Africa.