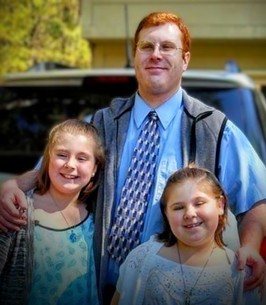 On October 3rd 2022, Christopher William Holcomb, adoring son and loving father to his two daughters, passed away at his residence in Swanton. Chris was born August 30th 1975 in Burlington VT to David Holcomb and Cheryl Grimm (Dennis).

Chris was known for his quirky sense of humor and contagious laugh. He had a way with people that made you feel at ease. If you knew Chris, then you probably had a funny nickname or an inside story or joke that made perfect sense to no one but the two of you. He was easily distinguishable in a crowd. All you had to look for was his iconic orange hair.

Chris was also an avid collector. He collected both things and experiences. He loved to collect books, action figures, and music. Even though his taste in music evolved over the course of his life, his love of music was always constant. Wherever he was, the music seemed to follow him.
He is survived by mother Cheryl (Tom) Grimm, his father David (Betsy) Holcomb, his brother Jay Holcomb of Williston, David Holcomb Jr of Saint Albans, sister Tammy (Neal) Woodard of Georgia, the love of his life Jocelyn Holcomb, his two beautiful daughters Madison and Morgan (AKA Madster and Shrimp), his niece Whitney (Melle), as well as other loving family members.

A visitation for Chris will be held on October 10th at 11am at LaVigne Funeral Home, followed by a funeral service.

After the funeral service there will be a burial at New Mount Calvary Cemetery.