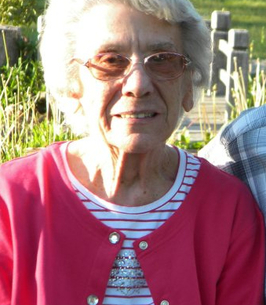 On October 20th, 2022, Doris Marcelino passed away at the age of 98. Doris was born on May 30th, 1924 to parents, Edward and Anna Proulx. She was one of five children having been predeceased by Edward (Sonny) Proulx, Jeanette Izzo and Norma Bernadini. Doris attended Burlington High School and completed the hairdressing program at the Vermont College of Cosmetology.

Doris married the love of her life, Martino (Tina) Marcelino on November 11th, 1948. Together, they had two sons, Alan Martino Edward and Brian Gerard. They were married 65 years before Martino passed away in 2014. She was also predeceased by her son Brian (2021).

Doris loved hairdressing. She spent endless hours in her shop, “Tina’s” until retirement. Doris loved camping with her husband and family, having spent countless summers at their camp in Grand Isle along with other weekend adventures. She loved cooking for her family and was an expert in the art of knitting and crocheting. Doris loved crafting sweaters and hats among other things for her five grandchildren. She also was an avid reader of mystery books often sharing her completed novels with her family.

Doris was kind in heart and spirit. She held her Catholic faith close and was a life-long member of the Holy Cross Church. Her witty personality and strong sense of family will be dearly missed by all.

A Mass of Christian Burial will be held at Holy Cross Church in Colchester on Thursday, October 27th at 1pm. Prior to services, there will be visitation at the church at 12:00pm. In lieu of flowers, donations may be made to the Multiple Sclerosis Foundation or to the Humane Society of Chittenden County.