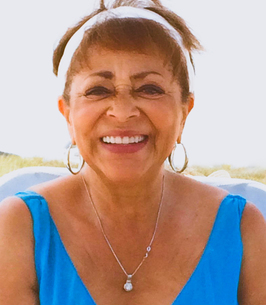 Lucille (Sealy) Bell Sargent, age 81, passed away on October 10, 2022, in the loving embrace of her husband Don, and her daughters, Sarah and Simone, in her home in Colchester, after a courageous battle with lung disease.

Lucille Bell was born on August 10, 1941, in Jersey City, NJ, the youngest and 13th child of Sadie Clay Bell and Clyde Bell. She was raised by her heroic mother, after her father abandoned the family when she was an infant. She graduated from Henry Snyder High School, and worked in New York City for Jonathan Logan, Inc., and New York Telephone Company.

In August, 1964, while vacationing in Montreal, with her lifelong friend, Hedy Copeland, she met Donald Sargent of Johnson, Vt. and a 58 year love affair began. They were married on January 2, 1965, in Jersey City, NJ. They lived in Burlington and Lucille worked for New England Telephone Co. They moved to Essex Junction in 1967, and had two beautiful daughters, Sarah in 1967, and Simone in 1970. In 1975, they moved to their current home in Colchester. Lucille then worked for UVM Early Childhood Development Center and IBM, and retired in 1999.

She and her husband traveled extensively in the US, Europe, Mexico and Africa, and she had the refrigerator magnets to prove it.

She is survived by the love of her life (and she was his) Don, her daughters Sarah (and Jeffrey Lewis) of Baltimore, MD and Simone (and Raymond Hutter) of New City, NY, grandchildren, Alex Lewis, Malcolm Nails, Brandon Lewis, Lauren Lewis, Olivia Lewis, Langston Hutter, and Myles Hutter. She leaves behind sisters Mary Curtis, Pauline VanCroft, Annis Bell, and Evelyn Johnson, sisters-in-law Mary, Monica, Carmine, Sylvia and Lindy (Sargent), brothers-in-law David Sargent and Charles Curtis, and numerous nieces and nephews in both the Bell and Sargent families. She also leaves behind countless friends.

She was predeceased by her parents, brothers Edgar, Clyde, John, James, Morris and Herbert (Bell) and sisters Delores Holmes and Wayne Powell.

She had a green thumb reflected in her potted plants and flower gardens; she loved recipes and cooking; decorating, reflected in her beautiful home; and shopping, especially for bargains. Most of all she loved her family, fiercely, unconditionally, and judgement-free, and her strength and love are inspiration to them all. She will never be forgotten, and her legacy will live on through her children and grandchildren.

“Our constant, best friend, person, ride or die, companion, biggest supporter, protector, defender. The person who believed unwaveringly in us in spite of our faults and mistakes, and loved us unconditionally from the time we were born. An adoring and adored grandmother to 7 beautiful grandchildren, to whom she was not just “Grammy”, but also their best friend, biggest cheerleader and confidant. As she said “don’t mess with my kids” and she meant that, and we were always glad they were “her” kids too. She was a wonderful, keep it real, badass wife. We are so blessed to grow up seeing and basking in the glow of our parent’s REAL, true love, commitment and adoration of each other. And our children are so blessed they grew up with that gift also. She loved us all fiercely and perfectly. Love you forever Mommy, Sarah and Simone”

The family would like to thank the amazing caregivers at UVM Medical Center and UVM Home Health. We would also like to acknowledge Colchester Rescue and the Colchester Police.

Lavigne Funeral Home (132 Main St., Winooski, VT 05404) will be handling the arrangements. Visitation will be from 6-8pm on Tuesday, October 18th. A funeral will be held at 11am on Wednesday, October 19th. Burial will be immediately after at Evergreen Ledge Cemetery in Johnson, VT. The funeral will be live-streamed at vtfuneralhomes.com. Donations may be made to the Vermont Chapter of the American Lung Association or to the Pulmonary Fibrosis Foundation.

To stream Lucille's service on Wednesday 10/19 at 11:00am EST, paste this link into a new browser:
https://livestream.funeralscreen.com/lavigne-funeral-home/lucille-sargent/