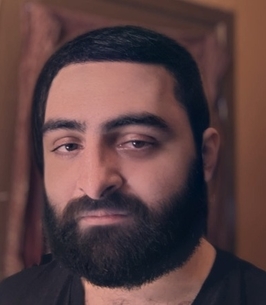 Pan Fenris Costa-Mangina was born on the 2nd of October in 1992 to his loving parents Anne-Marie Costa and Tony Mangina, later to be joined by his devoted step-parents Matthew Tanner and Adrian Mangina. He came into this world a footling breech baby, which set the tone for his challenging path in this life.


Pan was a wildly brilliant human who excelled academically. He was acerbically funny, liking to push the boundaries of propriety in his commentary on life or politics. He was an incredibly talented artist who worked in many mediums, including computer graphics in video games, digital illustration, colored pencils, watercolor, and even needlepoint. He was gifted with computers from an early age, building them and making music on them. If Pan picked up a guitar, or a mandolin, an electric bass or a ukulele, he could play it. He was both self-taught and quiet about his musical prowess. .He spent many hours a day connecting with people from around the world on creative projects.


Pan was a man of few words, but those who took the time to get to know him were the better for it. He was a slow burn who worked his way into the hearts and minds of his friends and his family. We treasure having had him among us,


Ozzy and Pan had a contentious relationship in their teen years, which evolved into one of the most profound connections possible between two brothers, saving each other’s lives both figuratively and literally. To listen to them banter at family parties was more hilarious and entertaining than anything on TV.


Pan was diagnosed with Type 1 diabetes at 10, and we know that every day after that was a gift. He also struggled with addiction, which robbed him of the ability to see how truly gifted he was, and stole the opportunity to fully express his full potential on this planet, and eventually stole his life.


One thing is known: he is deeply loved and will be sorely missed by innumerable family and friends. You know who you are, and we appreciate the friendship and love you hold for Pan and for our whole family.


In lieu of flowers, please consider making a donation to the American Diabetes Association https://diabetes.org/?form=Digital&ada_source=WWP211001LW001M001CC&ada_sub_source=google&utm_source=google&utm_medium=search&utm_campaign=awareness-campaign&utm_term=memorial&utm_content=ad&autologin=true&s_src=AAP181101LXXXXM001CC%E2%80%9D&gclid=Cj0KCQjw4omaBhDqARIsADXULuUcNXjTsCaM3BiYyFWxKgyJ0lCWQE2D-IG_s9aD5ay3y6Hud3rTREUaAqZUEALw_wcB&gclsrc=aw.ds or to Burlington’s Safe Harbor. https://www.chcb.org/locations-providers/safe-harbor/