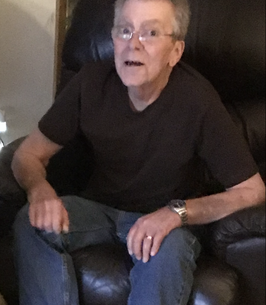 On June 4th, 2022, the Good Lord called Richard (“Dick”) Comeau home.
Dick was born March 31st, 1947 in Colchester, Vermont to John B and Theresa (Kolb) Comeau.
He graduated from Rice Memorial High School and married the love of his life, Linda (Lynn)
Parrow, on October 19th, 1968.
Dick was a motorhead from the time he was a teenager. He worked at Kaigles Citgo as a young man and meticulously cared for his cars throughout his life. Dick served 6 years in the Vermont Air Guard then spent the rest of his career as an Inspector at GE/General Dynamics. He retired in 2005 after 40 years of service.
Dick was a devoted father and Papa, as well as a lover of Red Sox baseball and Patriots football. Those who had the privilege of knowing him would agree that he gave the best hugs. He also spent many hours working in his yard and garden and was a faithful member of St. Mark’s Church in Burlington, Vermont.
Dick is survived by his son, Kevin Comeau, Kevin’s fiancé/friend Kallie Senna, and her daughter Miss Savanna. He leaves behind his grandson Tyler Comeau, his sister, Kathleen (Comeau) Therriault and her husband Henry Therriault, and sister-in-law Patricia Comeau.
Dick is also survived by his nieces and nephews, Kimberly Parah, Ryan Therriault, Angie Isaacs, and Heather Sikora, as well as their families.
Dick is predeceased by his loving wife Lynn, his parents, John and Theresa, as well as siblings
Bob Comeau, George Comeau, and Mary Pat (Comeau) Gibbs.
Visiting hours are Friday, June 17th from 4:00-7:00 PM at LaVigne Funeral Home in Winooski,
Vermont. A small service will be held at the funeral home on Saturday, June 18th at 11:00 AM with a burial to follow at Fort Ethan Allen Cemetery.
Our family would like to thank the staff of the ALS Clinic at Fanny Allen for the care and support they provided. In lieu of flowers, donations can be made to the ALS Association.