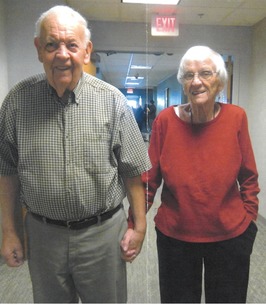 It is with sadness the family of Gerard and Ruth Villemaire announce their passing. Gerard and Ruth were married on February 16, 1952. They were married for 70 years! They were constants in each other’s lives and the family has comfort knowing they are together again. Let us share this most special couple with you.
Gerard A. Villemaire of Winooski passed away on May 14, 2022 at Our Lady of Providence surrounded by family members. He was born the son of Clement and Gertrude (Sullivan) Villemaire on February 11, 1929. After serving in the U.S. Army in Guam, Gerard worked as a painter and decorator (master with wallpaper). He attended St. Francis Xavier School and Winooski High School.

Ruth Ione Letourneau Villemaire of Winooski passed away on November 5, 2022 at Our Lady of Providence surrounded by family members. She was born the daughter of Raymond and Ione (Willette) on May 24, 1932. She was a graduate of Burlington High School Class of 1951. Ruth was employed at Sears and as a receptionist at Banknorth.

One of Gerard and Ruth’s favorite things was spending time with family. For many years they would host family for Thanksgiving dinner at their Orchard Terrace home in Winooski. Family didn’t mind eating in multiple shifts just to be around the festive table Ruthie created. They also hosted a family pinata party each Christmas for many years. Their home had a vaulted ceiling for hanging the pinata and providing great acoustics for the Christmas carols that would end the party festivities. Their nieces and nephews, and great nieces and nephews, were fortunate to have Ruthie’s homemade cakes, made with love for birthdays, baptisms, graduations, and wedding/baby showers.

Gerard and Ruth started camping at Ricker Pond State Park in Groton, VT in the 60’s. They took their nieces and nephews camping and then it became a yearly camping trip they would look forward to like Christmas. To this day some of their nieces and nephews still camp at Ricker Pond. Ruth and Gerard also loved the Maine Coast taking trips to Wells, Ogunquit and Bar Harbor. They spent a week each summer for many years with Ruth’s sister Nancy at Moody’s Cottages in Wells Beach, Maine. If their family was spending time in Maine, Ruth and Gerard would try to visit.

Gerard and Ruth lived in Winooski in their Orchard Terrace home for almost 40 years, before moving to The Pines in South Burlington where they made many more friends. Gerard rediscovered his love of playing Pool, and Ruth participated in many craft shows and managed some services the community room offered. They remained active in The Pines community until they needed to move to Our Lady of Providence in 2019. Wherever they lived, they gained more love and appreciation and spread the love to others.
Gerard and Ruth’s family can’t thank them enough for all they have done for us and all the wonderful memories they created. We always felt their love. Their legacy lives on in their extended family and the many generations to follow.

The family would like to thank the incredible staff at Our Lady of Providence in Winooski for their love, care and attention to Gerard and Ruth. They became their second family. The family also appreciates the wonderful care provided by UVM Home Health and Hospice to Gerard and Ruth. The family asks that you send a donation in Gerard and Ruth’s memory to either Our Lady of Providence: 47 W Spring Street, Winooski, VT 05404, or to UVM Home Health and Hospice: 1110 Prim Road, Colchester, VT 05446.

A Mass of Christian Burial will occur on December 2nd, 2022, at 11:00 AM at St. Francis Xavier Catholic Church, Winooski, VT. Burial will follow immediately at Resurrection Park in South Burlington, VT.