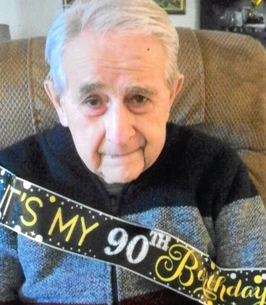 Theodore (Ted) Willfred Arel of Colchester, Vermont passed into the arms of our lord on September 25th, 2022 at the age of 90 years old. He was born April 22nd, 1932 in St.Albans, Vermont. He was the son of Theodore R. Arel and Irene Roberts (Arel) of Sheldon, both are deceased. He was the oldest son of 10 children. Ted married his high school sweetheart Mary Arel (Murray) on September 8th, 1952 and they had recently celebrated their 70th wedding anniversary.

Ted graduated from BFA St. Albans in 1951. Throughout his four years of high school he distinguished himself as an exceptional athlete in baseball, basketball and football. He served his country in the Vermont Army National Guard, the US Navy, and US Marines as a medic. He also served during the Korean conflict.

Theodore was active at Holy Cross Church in Mallets Bay where he was an usher for several years. He was also on the parish council. He served on the Colchester civil board as a Justice of the Peace for several terms. After working in sales of paint and glass for several years, he then established his own business, “CRASH Auto Glass” with his wife and four children. He retired December 31st, 1997.

He enjoyed his winter Florida home. He was a member of Colchester Knights of Columbus, BPO Elks, The Eagle’s, the VFW, and the American Legion. He enjoyed dancing, golfing, reading, sports, traveling, and biking.

Theodore’s deceased family members include Darlene Arel, Stanley and Shirley Arel, Shirley Arel of New Hampshire, Shirley and Tom Phillips, Sandra Gallant, Carolin and Mel Simmons, sisters in law Elenor and Charles Crane, Ramona and Raymond Torrey, and brothers in law James Murray and his wife Juanita, and Harold and Rita Murray.
Ted was blessed with a most wonderful friend Marcel Bolduc. For years after work they met daily for a 4 O’clock beer and would solve the problems of the world. It is without a doubt Marcel was a great influence of joy and comfort for Ted. During Ted’s time of illness, Marcel, Carol, and Lucille Cunningham were most supportive.

Services will be held at Our Lady of Grace Church in Colchester beginning with visiting hours at 10am followed by a funeral Mass at 11am. Immediatley after mass the burial will be held at the Grand View Cemetery, Charlotte with military honors. After the burial there will be a gathering at the Arel home.

In lieu of flowers, the family requests any memorial contributions be made to St. Jude Children’s Reasearch Hospital. PO Box 474 Memphis TN 38101-9958.